Yves Klein and John Cage are two of the most influential artists of their generation.  And while each is widely recognized for his innovative experimental artistic principles and practices—especially in his respective native country—rarely have they been seriously discussed together.  The exhibition Yves Klein / John Cage: PLAYING WITH FIRE will mine and explore one particularly intriguing affinity between these two formative artists:  their attraction to and manipulation of fire as an art-making tool.

Throughout their careers Klein and Cage each sought out purposefully unpredictable techniques and (anti)materials by which to create art. Both artists were eventually drawn to the volatile—potentially destructive, unquestionably magnetic and awesome—power of flames.  In 1961 Klein made a series of “Fire Paintings” by launching an open flame at chemically modified paper.  Similar to the technique he used to create his famous “Anthropometries” series (wherein nude models covered themselves in paint and then rolled directly on the canvas), to create the “Fire Paintings” Klein used models who were coated in flame retardant.  Wherever the models’ bodies touched the surface of the paper, the action of the flames was, to a certain extent, blocked.  The “Fire Paintings” were made with the assistance of the Centre d’Essais du Gaz de France (the central research laboratory of the National Gasworks of France) and are a breathtakingly beautiful component of Klein’s oeuvre.

Decades later, in a far less dangerous working environment, Cage experimented with fire as a way to produce unsystematic imagery on paper.  While working at the Crown Point Press in San Francisco in the late 1980s and early 1990s, Cage created a series of monoprints on smoked paper (“Variations.”)  To infuse the paper with smoke and achieve random burn marks, buckles and crackles, Cage would build a small fire directly on the printing press and then smother it with dampened paper.  Cage honed this technique while working with Ray Kass at the Mountain Lake Workshop in Virginia.  In 1990 he created the “River Rock and Smoke” series—sixty-one unique drawings and watercolor on smoked paper that represent some of his most graceful and poetic visual works.  The crispy burn holes and organic shapes left by the smoke and fire are aesthetically in tune with Klein’s fire paintings.

Conceptually, Klein and Cage both enjoyed the fact that fire itself could take responsibility for the look and feel of each unique final work. They welcomed the unpredictable forms, texture and colors produced by flames and smoke.  Cage and Klein’s experimentations with smoke and flames manage to capture the wildness and hypnotic allure of fire in two distinctive and equally innovative styles.  Seen together, Klein’s “Fire Paintings” and Cage’s smoked paper works reveal a rich and heretofore unexplored parallel between these two seminal artists. 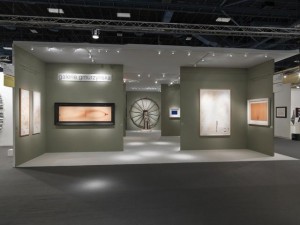